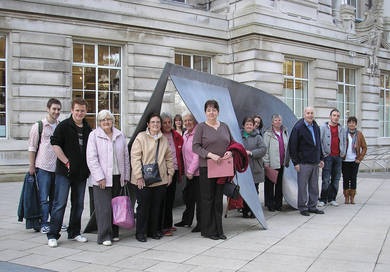 We considered quotes from the likes of Sean Scully and C.S Lewis: Words of hope, words of vision. With an emphasis on fresh images and a vision for the future, is possibly best described for this group was in the words of African Philosopher, John M-bit-i, “the past that lies before them”.

This quote is found in a book called “The Moral Imagination, The Art and Soul of Building Peace” by John Paul Lederach, who is the Professor of International Peacebuilding at the Joan Kroc Institute for International Peace Studies, based at Notre Dame University, Indiana. Lederach is widely known for his pioneering work on conflict transformation, and is involved in conciliation work. He is no stranger to Forthspring Inter-community Group as he has done some work with this centre in the past. When told about this project, Professor Lederach sent this message in support of the exhibition and projection:
Mon 11/10/2010 06:02

News reached me that today your exhibition will be launched and opened to the public.  Please let me extend a most hearty congratulations.  Yours is never an easy process.  Conflict has a natural tendency to pull things apart and down.  Conflicts that carry the legacy of many decades, dare we say Centuries, hold a gravitas of weight that seem to create heavy lead feet that barely move.  In these contexts, with words and music, image and palette, artists must mould into social consciousness something that does not yet exist, the birth of which requires an imagination that ventures into a land beyond the too-worn trails that everyone has for years chosen to walk --  in large part because they are safe.  In these hard terrains, the pathways of conflict are known.  Peace is the mystery.  You have chosen the mystery that breaks beyond the divide.  I applaud your imaginative mind courageous hearts.

In Conversation with Carole Kane from MOMA from Northern Visions/NvTv on Vimeo. 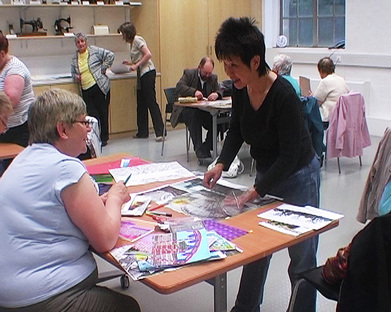 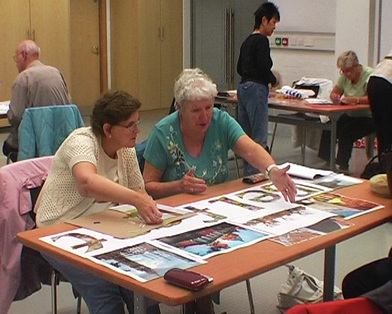 Ward Stothers, a participant on the programme from the Vine Centre, wrote the poem below and read it out at the launches of the exhibitions in The Ulster Museum.
Day

Light announces day.
Hourglass stands
Loosing life with every drop of time.
On every grain of hope.

Liquid walls of rolling glass
Invade the land
The sea insults the shore.

Storm clouds pine and sigh in complaint
Snap and bark in showers of argument
Tress, too stiff, too tall to dance
Etch and claw in beckoning earth.

Buds open in silent adoration,
Whet fields sway their harvest song,
As violins whine with sitting sun
And all look up to sing who dropped the rain. 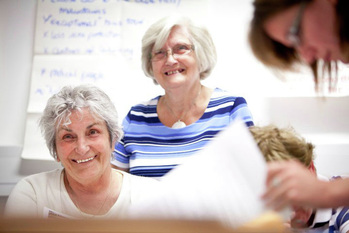 The links below show images which were taken of the group at work, in the opening exhibition and projection.