Please scroll down to view documentary and presentation videos. 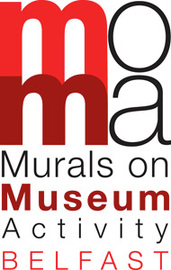 MOMA, Belfast
Murals on Museum Activity brings colour to the walls of the Ulster Museum and community centers across Belfast

On the 15th October, the Ulster Museum hosted a stunning new exhibition called MOMA Belfast, which comprised of digital murals and creative collages illustrating future visions of the city from the perspectives of citizens from interface communities in Belfast.

MOMA ran as part of Belfast City Council’s Creative Legacies programme, and was funded by the European Regional Development Fund under the Peace III programme. This project would not have happened without this support.

As you might already know, MOMA usually stands for the Museum of Modern Art in New York but for this project, the abbreviation stood for, “Murals on Museum Activity”, Belfast.

The project was delivered in partnership with the Workers’ Educational Association, the Ulster Museum and three community centers across Belfast. This involved participants from Ballynafeigh Community Development Association, the Vine Centre and Forthspring Intercommunity Group and took place with the support of the Ulster Museum. The participants came from different traditional backgrounds and they worked together to explore the legacy of the conflict. The concluding creative pieces promote Belfast city as a place of peace, trust, and tolerance.

Although the majority of the group came from Belfast and an added extra were four people from the United States who lived here during the time of the programme. Their input and different perspectives were very enlightening.

The participants completed workshops about cultural diversity and collective identity together with digital photography, collage and art. These sessions concluded with a set of images that demonstrates “the past that lies before them”.

Most of the workshops were delivered in areas such as the new “Troubles” and “Art Discovery” work spaces in the Ulster Museum. It wasn’t long before the participants were claiming the museum as their own and this became a routine place for them to visit inside and outside of the programme.

Learners were encouraged to develop a vision for a future Belfast. This “mental picture” seemed difficult to define and when they shared their experiences of living through the “hard times”, it was clear to see how imagining beyond this is easier said than done. There were also many lighter moments. Many shared experiences of their early married days at the beginning of the troubles, these stories continued as did the laughter which had become an essential ingredient through the hard times and now in this programme as well. These people, who had experienced so much, have now discovered not to take things in life too seriously.

The next stage of the project involved some technical expertise from Darren Nash as this imagery was adapted and projected onto the façade and walls of the museum building. This became quite literally: “Future Projection” and the new Murals were displayed on the exterior museum walls as part of the Belfast Festival at Queens. The projection accompanied an exhibition the art work, which was also seen in the Ulster Museum.

Right from the very start, one of the ambitions for the project which came from one of the participants, was that she hoped that people “would be allowed to feel like celebrities”. This was very much the case at these events as participants and their friends felt a strong sense of pride about Belfast.

MOMA ran as part of Belfast City Council’s “Creative Legacies” programme, and was funded by the European Regional Development Fund under the Peace III programme.